215-854-5961
Published Friday, December 21, 2012
Referenced on the Front Page with the Article on Page 8
You may read the article by clicking here and then clicking on "It's RIP tide along the Delaware River"

Due to the restraints of publishing and the minimal space that could be devoted to this story
in the Philadelphia Daily News about this long and complex issue of these tombstones from the past,
we felt we should take the opportunity, that the space that Valerie's newsletter provides,
to better explain our position about the tombstone issue and news article.

It should be noted that this explanation described here are the same points that we have
presented in this newsletter since we started it back in February 2012 and can be found
mentioned previously elsewhere in this newsletter.

Assembling these points here at the top of this newsletter hopefully will make our
feelings on the matter of the tombstones, abridged in the Daily News article, much clearer to the reader.

1-
The how and why the abandonment of these tombstones came to be back in 1956, is not our focus.
What's done is done and for the most part, sadly, there is no practical way of changing it.

It is Valerie Morrison's quest only to proceed to a solution to the problem of
removing only the 22 or so visible tombstones of our Philadelphia ancestors found on this shoreline
and in doing so, insure that these stranded tombstones receive the respect that they deserve
and that the memory of Monument Cemetery (Philadelphia's second rural cemetery)
will never be forgotten. 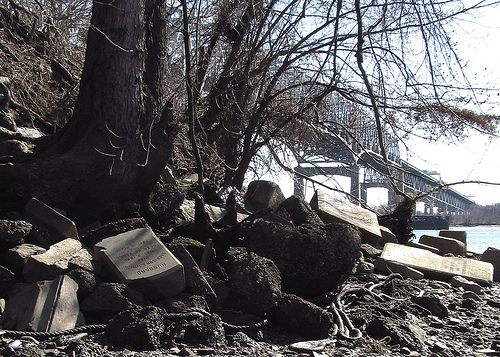 Although we are appalled that these 22 tombstones have been left exposed here,
with reports now coming in since 1960, and they continue to remain there
seemingly ignored and without concern by agencies since then and those agencies
that we have tried to contact in the recent past without results...

The good news is that we must rejoice in that now, having found these intact tombstones,
it gives us the opportunity to finally pay homage to them.

2-
Valerie's plan is not fashioned by any means to set a precedent on the disposition of
the rest of the abandoned "intact" tombstones, exact number of which are unknown,
that economically speaking will never be able to be retrieved
to put in a Philadelphia park and/or be repatriated to their graves.

In the case of these tombstones, still hidden from view but potentially vulnerable
to be revealed by water erosion, the best that we can hope for is to insure that
they remain covered for all eternity, that a delegation of clergy* of all denominations
will travel to the site to bless them and a memorial plaque will be
placed there at this Delaware River site to remember them by.

*
We are finding many, many clergy readily volunteering to join this delegation
when the time comes for this ceremony to take place.
We are suggesting that only the younger and more physically fit apply
as the way into and out of this area (if no improvements are made prior to the ceremony)
is physically challenging.

3-
There has been some confusion about the facts of this tombstone issue
that may have been mistakenly reported by other individuals on the web in the past and before us,
that we would like to take the opportunity to clarify now, based on the limited information
that we have been able to discover thus far...

There were 28,000 people buried at Monument Cemetery and most* all of them were reburied
at Lawnview Cemetery in Rockledge.

*
Approximately 100 of the families of the 28,000, when contacted of the impending move,
elected to make and pay for their own arraignments to have their loved ones graves and tombstones reburied at other cemeteries.

Contrary to previous reports by others, they were not buried in a mass grave at Lawnview Cemetery
(writers possibly confused with the 10 year earlier 1946 exhumation
of the 47,000 Lafayette Cemetery graves that were found in a mass grave** in Bucks County in 1988).

**
While a strip mall was being built near the Neshaminy Mall, wooden boxes containing dead bodies of unknown origin
were discovered during the excavation to construct the foundation for the strip mall.

Work was immediately suspended and officials, after spending a week and a half digging test shafts at the site,
uncovered 32 trenches, each 300 feet long containing stacks of these wooden boxes
containing the remains of countless dead people later found to have been exhumed from Lafayette Cemetery
and that were never individually reburied with their gravestones as the person,
who was contracted by the City of Philadelphia, was paid to do).

Or...
(Most of the areas in Lawnview Cemetery devoted to the Monument Cemetery graves
are marked with easily un-noticed flush-to-the-ground grave markers
and these areas, to the unknowing visitor, can mistakenly appear as a mass grave site
as can be attested to by this aerial view, in the below picture,
of one of the Monument Cemetery grave sites, noted in white, at Lawnview Cemetery). 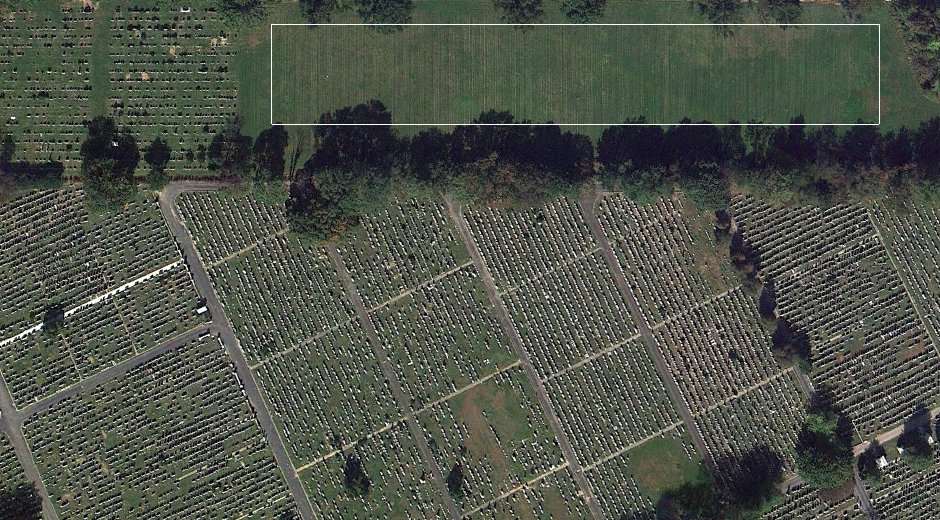 Before the exhumation of the 28,000 bodies and reburial at Lawnview Cemetery,
an attempt was made to contact each of their families.
Of the 28,000, the families of 26,500 (some reports indicate 27,300 / some reports indicate 20,000) could not be found
and it was the tombstones*** of these dear departed that were not taken to Lawnview
when their bodies were reburied there, but were instead, because of budgetary limitations,
sold as rip/rap (rubble to protect shorelines from water erosion) to contractors.

***
A better estimate of how many individual tombstones went unclaimed by their families is 13,250.
This is based on the fact that, although "only" 26,500 graves were unclaimed and assuming there were on average
2 names inscribed on each tombstone, this would suggest that there were half or 13,250 tombstones abandoned and sold as rip/rap.

****
Heilman's Tombstone is one of the 22 Tombstones that appear at low tide on the Delaware.

He and his Father William, Mother Rebecca, George K. Heilman (probably William's brother)
and Horace Thatcher (relationship unknown) where all buried with no individual plaques in the family plot
which is only identified with the family name [Heilman] as this picture so illustrates.

The graves of those, whose families were able to be contacted
and who agreed (approxmately 300 families) to have their loved ones graves moved to Lawnview Cemetery,
were reburied with their tombstones.

As rip/rap, some of these tombstones were crushed while many were not (as the 22 now visible
tombstones in question will attest to) and were found to be used by contractors who purchased the rip/rap
in various areas along the Delaware River, the mouth and bank of the Frankford Canal
and at other places known and unknown in Philadelphia to control water erosion and also for use as landfill.

The use of these abandoned tombstones ("repurposing" as some would like to call it today) of the dead
did indeed help the living as one of the support piers***** of the Betsy Ross Bridge,
(built to alleviate traffic congestion when traveling to and from Philadelphia and New Jersey),
was shielded from water erosion and made possible and the construction of the Frankford Canal,
expertly built around the time when the graves were exhumed in 1956,
finally alleviated the constant flooding that had made life miserable and unhealthy
for the residents of Bridesburg and the surrounding area for over 300 years.

*****
We find it highly unlikely (as previously reported by many others) that any of the tombstones
were used in the actual construction (aka pour) of the support piers of the Betsy Ross Bridge.
One reason is that the construction of the bridge did not begin until 1969, 13 years after the exhumation of the graves,
and another reason is that hign tensile strength concrete only would be used for a support pier
and "fill" with tombstones or any other debris would compromise it's strength, however...

The land area around the footing of one of the bridge's support piers (it was water prior to 1956)
was most probably composed of some of these tombstones (whole or crushed) along with other debris from the cemetery
in addition to other sources of land fill.

In the event no agency takes the 22 tombstones,
"Valerie has a Plan B in that - She has a big heart and an even bigger backyard to take them to".

5-
Frank DeAngelo's statement in the article...
"The more I researched the gravestones that were dumped here," DeAngelo said,
"the more I got to love the people they memorialize, and the more angry I became."
...Would be better understood as:

"The more I researched the (lives of every individual inscribed on the 22 visible) gravestones that were dumped here,"
DeAngelo said, "the more I got to love the people they memorialize, and the more angry I became
(knowing that their tombstones continue to remain stranded and ignored on the Delaware Shore
by officials who could easily rescue them)."

6-
Valerie Morrison and her associates in this endeavor are very much embarrassed to have money spent on this recovery
when it would certainly be better spent feeding the hungry and helping those financially caught
in the current economic quagmire that many of us find ourselves in today.

It is our hope that this recovery will be performed entirely with donations and/or with grants already appropriated
and will not be allowed to become another expense to the City of Philadelphia or the State of Pennsylvania.

7-
Because of limitations of space in this article for acknowledgement to other contributors, without which,
this story would never have been fully revealed...

Let us least not forget the dramatic photographs of Ed Snyder, pwbaker and others
plus the previous research by Ed Snyder expanded on* by our Frank DeAngelo
that prompted Valerie Morrison's intervention to this cause.

*
Which includes a report of each individual's lineage and history of each tombstone found.

Hopefully someone or some agency or organization (not necessarily the City of Philadelphia as alluded to in the article)
seeing this story with the authority, influence and means to correct this situation
of removing the 22 or so visible tombstones
will be encouraged to call Valerie Morrison at (215) 483-8881
or contact her by email at...
PsychicValerieMorrison@comcast.net

Until then we must remember...
The disrespect continues as long as these 22 tombstones remain visible and stranded on this shore. 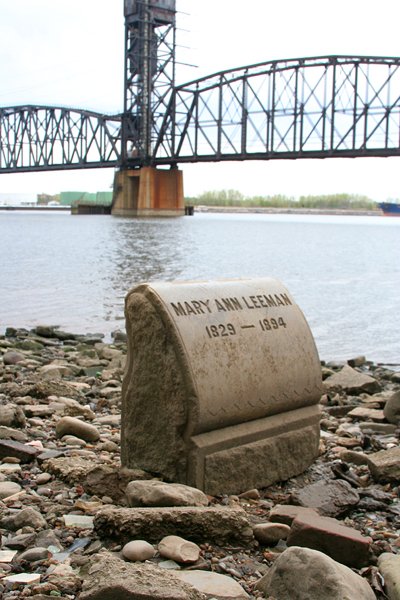 "And sadly between the dates on every tombstone you will find,
The story of their life that can never be told,
with just a simple chiseled line."

"Consider this as you pass me by
As you are now, so once was I
And as I am now, so too you will be
Someone please remember me"

From a Tombstone epitaph from long ago

"Show me your cemeteries
and I will tell you what kind of people you have."

I wish to thank the Owners and the City Editor of the Philadelphia Daily News
for approving and allowing this story to be told by their Daily News Staff Writer Dan Geringer.

Dan Geringer's genuine and sincere interest in reporting this story was certainly very much appreciated,
but his extra effort to refer this to an agency that might be able to intervene and help us with this endeavor,
was totally unexpected and acknowledges that the Philadelphia Daily News is not just another "me too" newspaper
as it certainly goes far beyond just the mere reporting of the news and I am indeed very humbly grateful.